The Lowell Covered Bridge served as the crossing over the Middle Fork of the Willamette River beginning in 1907. It later became the upper end of Dexter Lake. It was replaced with a modern concrete structure in 1981. This image was captured from the new replacement bridge. It’s common for a retired bridge to have a roadway cut away at one end and then preserved as a historic site. Today, the Lowell Covered Bridge houses an interpretive center describing the area’s early history.

There are no reviews yet.

Only logged in customers who have purchased this product may leave a review. 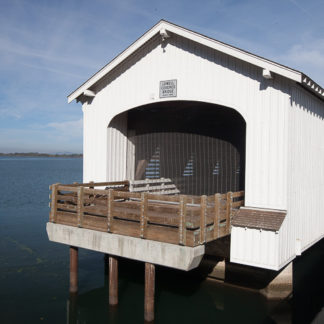 Prices are changing - In an effort to keep our prices affordable, we are now working with a new vendor and so are changing our pricing over the next couple weeks. Message 4/8/19 Dismiss